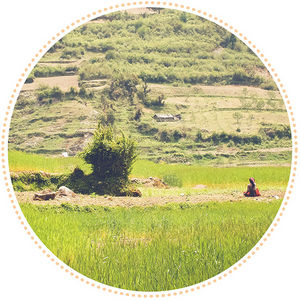 The Himalayas – sacred space somewhere in the mountains, still alive in the hearts of many and known through stories of miracles and enlightened masters. Many have visited those peaks to conquer, find wisdom and peace, learn about mystics and immortality, some never came back and others never dared to go. What is so special about these mountains, that makes people leave so many testimonies and stories?

In order to get the answer, one has to drop expectations
There I was, equipped with a little backpack and ready to go, standing at the bus station at 4am. For the first time in my life, I did not even print out a map of where I was going and how to get there. I just knew I had to visit the Himalayas and would go wherever the road took me. Just a week previous my old Indian friend gave me the news that he could not join me for this trip, as his mother was unwell. Instead of panicking and looking for another companion, I decided to let go of expectations and to learn from what life had to offer. Many stories about these mountains describe that one has to surrender completely in order to be able to see its true beauty and experience its force.

As I finally found the bus heading up to the snowy peaks and sat down, I started to observe that none of the other passengers were heading to the same destination as me. First I was smiling, thinking the bus will not be very full, so I will have lots of space, then soon after this strange thought, the driver approached. He told me I was the only passenger to my destination. I smiled and thought: “India. Me. The only passenger? A coincidence or silly a joke?” As soon as I realised he was not joking, I changed my ticket to the halfway stop and decided to see what will happen next.

A bumpy ride
The bus slowly started filling up and we started our journey, the road resembled a road to Death Valley, very tiny and only just allowing the bus to pass oncoming vehicles. After half a day on the bus, stopping many times for the workers to repair the road, the driver advised me to get off the bus at a road crossing. I was standing there, on the side of the road, in the middle of nowhere with some old wooden houses and a group of Indian tourists who had chosen the same destination as me.

An Indian couple, two policemen from south India, me and an old lady, dressed in an orange sari, probably a female monk. There we were. After we found a driver and continued our journey, the driver was continually on his phone until the policeman angrily told him he would give him a fine if he did not stop. Although he stopped talking, he did not seem to be bothered by the policeman’s presence and continued to drive like crazy, all whilst the lady in the orange sari was being sick out of the window until we reached the next village, where we had to find another taxi.

Finally, after hours of waiting in another taxi for more people to join us, 3 residents joined, carrying a huge mirror. After we all managed to fit in and whilst we were driving around the deadly mountain bends, with a huge mirror in the car, I could not do anything else but to smile on the inside. Could anyone have planned this ride better? It was already dark when we reached the village and I started to question, where was I going to stay for the night, as I did not have any way of finding or booking a hotel. I had never been less prepared for a trip as I was at this moment in India!

Just a coincidence?
The boy with the mirror then turned to us and told us about his boss owning a beautiful hotel on the top of the hill. We all decided to go up to this hotel together, passing through the village and continuing to drive up another mountain. It was then I started to worry. The car stopped and we were just sitting there in total darkness. There was a huge pile of sand in front of us blocking the road. The policeman looked at me saying I should not worry, which made me think it might be a sign. I told the driver to take me back down to the village, whilst everyone else had left the car to deal with the pile of sand. As I tried to get out myself, I realised the doors were locked!

Even darkness gets lighter after a second look
For a moment dark thoughts entered my head. Then something clicked and I became aware of myself and my behaviour, hysterically trying to get out of the car, whilst everyone else was trying to clean the sand away. I could not do anything else but to start laughing at myself. I started thinking: “Who are the residents that offered to bring us up to a hotel? How come the bus did not go to this village? What is this pile of sand doing here in the middle of the night?” Slowly I started to realise that all the coincidences might not have been coincidences and maybe this was the plan for me. Just as the realisation came, everyone returned and the driver decided to take me back to the village after he had dropped everyone at the top of the hill.

I was sitting there, with my mouth open, I inhaled deeply and hoped that we would survive the ride. Magically, nothing happened, the car did not overturn into the abyss in the valley as we drove over the huge pile of sand.

Things we do for and out of love
Finally, we reached the house. It was silent up there. The owner approached. He was my age. I stepped out of the car, still a bit annoyed but as he approached me with so much love my guard melted. He was standing there in front of me, so loving and polite, that I could not say no. He showed us our rooms, which seemed like they had not been cleaned since the house was built, there was no heating and no hot water. We were quite high in the mountains so it was getting cold.

I felt everything was happening for a reason. So, I took a deep breath and took the room. Other people decided to stay as well. As I got ready for bed, I realised the sheets had never been changed, they were so dirty and as I lay down, I could feel thousands of bacteria and little insects crawling over my skin. I thought I was going to scream and die. I used half of my bottle of essential oils in order to spray the bed and to calm myself down.

Finally, lying in the bed, trying not to scratch, whilst waiting for a bottle of drinking water, which one of the servants was getting me from the village, I started thinking about running away and finding another place to stay. I had not even finished my thought as the owner brought me all I needed. He sat down on my bed and showed me booklets about local attractions. He even offered to take me to visit his family in another little village far away. Then he looked at me very seriously and told me that I had to go and see the sun temple the next day as it was the oldest temple in the area. More than 300 years old. He was so humble and although it was so dirty, there was so much love and care in his home which made me feel at home.

Where there is true love there is ease
The next morning the owner took me for a walk. The sun had just risen and the village looked as if we were not in India but somewhere in Tibet. It was so original. I fell in love with the old wooden houses and will never forget the charming Sun temple. Then we grabbed his bike, which was running out of fuel and he put a plastic bottle of fuel in my hands to hold, that he had borrowed from his friends on the way. It was such an unusual experience, yet so joyful. Every now and then the bike's engine turned off and we had to turn it on over and over again. The entire way down the hill we drove without using the engine and enjoyed the fact that we were saving fuel! We were singing on the bike, laughing like children do, completely unconcerned and free, the wind was blowing, the sun was shining, there were picturesque mountains surrounding us and the feeling of deep happiness entered my body and mind.

We stopped at a small village where there was a tiny wooden house in the centre. It was his aunt's. There were only ladies living in this house and they served us tea. Despite the fact that they did not speak English and my understanding of Hindi was very basic, our connection was instant and never before have I felt more accepted and at home than here. They insisted we had to stay for breakfast and it was one of the best breakfasts I had in my life – sweetcorn with warm ghee. It was the dish that filled me with love. All the women were hugging and kissing me and I felt as if I was their child. There was so much warmth there. Simple yet powerful in its own simplicity. Their graceful grandmother was showing me how to make wool. She was so wise and only smiled with her big shiny eyes. I wished to stay there and to learn from her. It was hard to say goodbye, however, I was sure I would see them again.

When there is nothing better than walking through endless fields of wheat
My last afternoon before leaving, I spent walking among the fields of wheat on my own. The wheatgrass was so high; it almost reached my belly. Being there, I could not imagine anything which could make me happier. There was silence, peace, and love, while at the same time there was a deep continuous joy. It was hard to believe those could be so simple and natural to embrace, yet they were. It was there that I started to understand the power of the

The Himalayas surrounding me. I was indeed the happiest person on earth, breathing deep, feeling nature within and around me.

If you feel inspired, have any questions, or you would like to share your experiences and feelings with me, discuss any of the moments in detail write to me at: This email address is being protected from spambots. You need JavaScript enabled to view it..