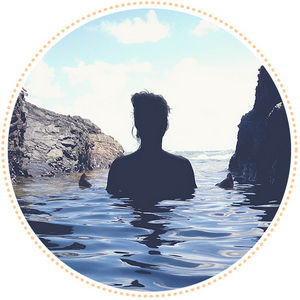 In the light of the moon we feel softness and tenderness. We let go and surrender to its embrace. The wondrous time of a full moon carries a message and vibration, helping us to face our limits, setting us up on the path to happiness with ease and compassion.

Natural moon cycles
Like the sun the moon also travels around the earth in cycles. In order to complete one lunar cycle, it takes 29.5 days. The movement and duration of one moon cycle thus corresponds to the duration of the female menstruation cycle. It is not a coincidence that the moon has been a symbol of womanhood and feminine divine energy since ancient times.

Moon and gravity
The moon's gravity affects all waters on earth. The tides come into existence due to the attraction between the earth and the moon. The moon tries to pull at anything on the earth to bring it closer to itself, while the earth is holding on to everything except water, which is constantly moving. This is why the moon has such a great impact on everything. Although our bodies contain a great percentage of water, scientists say, the moon cannot affect us significantly due to the small water surface involved compared to huge oceans. Still, some of you might notice subtle effects.

If you have a chance, take time to observe the movement of the waves at the seaside. Mostly you will notice high waves during the times of the new moon and the full moon, which is the consequence of the alignment between the sun and the moon, creating a strong gravitational force. During other phases of the moons cycle, the sun and moon are not aligned, thus the waves are much lower and calmer.

Moon and the Zodiac
As the moon moves through different signs of the Zodiac, it touches the planets forming different aspects to them. Such aspects last only a few hours and may affect our mood, behaviour and actions.

The phases of the lunar cycle:
In order to complete one lunar cycle, the moon takes on different shapes. The lunar cycle starts with the new moon (when the moon cannot be seen), it then continues to grow until it reaches its peak at the full moon and then it descends until it completely vanishes by the end of the cycle.

1. New Moon – the beginning of the cycle
Each lunar cycle starts with a new moon, this is when we cannot see the moon. This represents a time of new beginnings, a perfect time to rest and set intentions, which we then announce a couple of days later at the crescent moon.

2. Crescent and Waxing Moon
This is the time between the new moon and the full moon. The time when the moon is growing, reaching the shape of half moon and expanding towards the full moon.

This is a time of action, decision making and facing challenges with regards to your intention or new project. This is also a perfect time to adjust or change certain aspects of your intention to make sure it is for your highest good.

3. Full Moon
The moon comes to its full shape two weeks after the new moon. Full moon represents the middle of the lunar cycle – the point when you commit and bring your plans into realisation. The full moon appears when the moon is directly opposite the sun, which means that the earth lies between the moon and the sun on one single line.

This is an intense time, incredible things may happen, there is a great chance that new people will enter your life. It is also a time when your intentions start fruition. According to astrologers, it takes half a year, rather than two weeks for a new moon intention to be fulfilled – this is because that is the period it takes for the full moon to reach the same sign that the new moon was in during the time the intention was set.

In the past, the full moon was celebrated each month, this is why each full moon of the year has been given its own name. Most of the names are associated with the weather and natural occurrences:

4. Waning Moon
This is the time when the moon takes off, once again splitting in half and then completely diminishing to the dark moon. This is a time of gratitude, sharing our intentions and positive thoughts with others as well as releasing any kind of tensions, negativity, toxic relationships; recuperating and once again observing the death of the cycle.

5. Void Moon
The time when the moon is reaching its darkest point is known by the name of resting or void moon. This is the time when the moon waits for a couple of hours before entering a new Zodiac sign. During this time our plans may turn out different than expected. It is, therefore, a perfect time to surrender and leave it to the universe to do the rest. We grow in peace and readiness for a new cycle to begin.

Blue Moon
In ancient times, when tribes used a calendar relying on a tropical year, the year started at the winter solstice and lasted until the next. In most tropical years there were 12 full moons and each full moon was named after an activity corresponding to that time of year. However, there were years, when there were 13 full moons in one tropical year, meaning that one season had 4 full moons instead of 3, in this case, the third full moon of the season was called a 'Blue Moon'. Only in this way, the names that were given to the full moons still made sense. Due to misinterpretation today an explanation prevails, that a 'Blue Moon' is the second full moon in one calendar month, which is not true.

The name 'Blue Moon' actually originates from rare occasions in history when the moon actually turned blue. This happened due to natural phenomenon or catastrophes such as volcanic eruptions or monsoons, where enough dust was created to turn the moon blue. The expression 'Once in a Blue Moon' has since been used to label fairly infrequent events.

If you have any questions, you would like to share your experiences with me, discuss one of the moon phases in detail write to me at: This email address is being protected from spambots. You need JavaScript enabled to view it..